I haven’t been working on this project lately, but I finally got back to programming yesterday. I got the MSP430G2533 which has both hardware UART and SPI. This one will act as a bridge between the PC and the CC2500 radio. It could also be used to drive a serial LCD.

I managed to get the UART working, but for some reason I’m having trouble with the SPI communication with the radio. I’ve been wanting to get a Saleae Logic analyzer for a while. Now I have a reason!

On the hardware side, I put together a breakout board for the MSP430 and CC2500. It only has a few passives and two LED’s along with the MSP430 and a header for the CC2500 module I’ve been working with. I put them on opposite sides to save space, but that caused some problems. 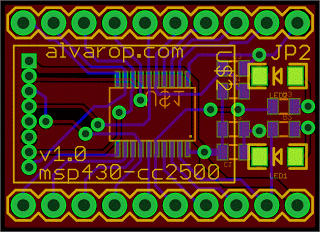 I want to have the radio and antenna exposed, which means the MSP430 needs to go on the other side. Unfortunately, this means that the pins are all backwards(Top-right is pin 1.) I’ll just have to keep that in mind while breadboarding.

Hopefully I’ll get the Saleae Logic soon so I can iron out these SPI problems. Once that’s done and I have these boards, you should start to see some much nicer projects (and better code!)