It has been two months since I arrived to Finland. I have two vacation days for every working month, so I decided to use them two weeks from now. I’m not really sure when I will be in this part of the world again, so I decided to take advantage of my geographical location. So where am I going?

The summer weather in Finland has been quite nice. Except for a few very warm days, I have been able to keep my apartment windows open. Most people here don’t think it is warm enough, and would very much like to travel south to have a warm summer. So what do I decide to do? As you might have expected… go north, way north.

There is an archipelago which is part of Norway called Svalbard. It is located north of the Arctic Circle, where it is nice and cold all the time. I found that there is a 5 day kayaking/camping trip in Billefjorden, so I signed up for it. I’ll be leaving Tampere on August 13th around 1am and returning the next Saturday (22nd) at 6:30pm. 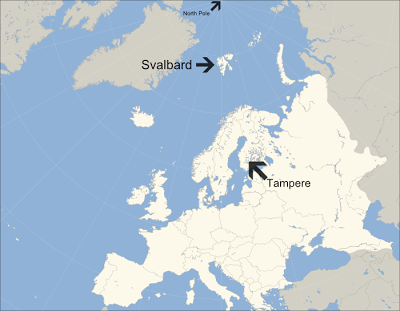 This is where I'm going.

It took me quite some time to figure out how to get to Svalbard and back. I am taking a bus from Tampere to Helsinki airport around 1:45am to catch my 7:20am flight to Oslo. From Oslo I will fly to Longyearbyen (in Svalbard) with a stop in Tromsø. The kayaking trip will be from the 14-18th of August. I’m not exactly sure what I will be doing the 19th, since my flight leaves the 20th at 4:05am from Longyearbyen to Tromsø and back to Oslo. I will spend Friday and Saturday in Oslo and on Sunday morning, I will take a train to Stockholm. Finally, I will fly from Stockholm to Tampere, arriving at 6:30pm.

There are many interesting things I have read about Svalbard. For example: There are about 3,000 polar bears so they have a rule. “Anyone outside of settlements is required to carry a rifle to kill polar bears in self defense, as a last resort should they attack”. Svalbard airport in Longyearbyen is also the northernmost airport with public scheduled flights.

The main problem with this trip is that I require some winter clothes, which I left at home… I will try and borrow whatever I can from friends here and the rest I will have to buy unfortunately. Either way, I’m looking forward to the trip and will definitely write about it after I return.