My trip began in Rochester, NY. I woke up early and finished packing. My housemate drove me to the airport early to catch my 10am flight. I arrived to JFK airport in NYC around 11:30am. I had lunch and found one of the charging stations to plug in my laptop while I waited until my 5:40pm flight. Even though there was no one seating next to me, I did not sleep much at all in the airplane.

The last bus and 777 in the background.

The flight arrived around 4:30am in London, ahead of schedule. After we landed, we were notified that the jetbridge was not working and we would have to take buses from the airplane to the terminal. I was in the rear of the Boeing 777, so it was quite a while before I got off the plane.

A friend of mine was taking the train from Cambridge in order to meet me in London. I took the Heathrow Express train from the airport to downtown London. My friend texted me instructions as to which subway station to go to, but it took me a while to figure it out. I did not take into account that it was rush hour since for me it was midnight. The stations were packed with people. I finally arrived to the destination and met my friend outside.

We walked around London for a bit, then sat down at a coffee shop for maybe two hours. We were both really tired, and didn’t feel like doing anything. After that, we walked around some more until I had to head back to the airport to catch my 4:10pm flight. I had lunch in some very crowded airport restaurant and headed to the gate.

I finally managed to sleep during the flight to Helsinki. We landed in Helsinki around 9:30pm. After getting my luggage and going through customs, I had to get a bus downtown. A friend who lives in Helsinki told me which bus to take.

I ran into some trouble when the bus ticket machine did not take my credit card. It also did not take bills, which are all I had, so I went to the help place at the airport to see if I could buy my ticket there. I couldn’t. What I did do is change euro bills for coins, and then bought my ticket using the original ticket machine. After a while, my friend met me in near the bus station and we went to a local pub. He was nice enough to let me stay in his flat in Espoo so I could take the train to Tampere (where I am now working) the next day. 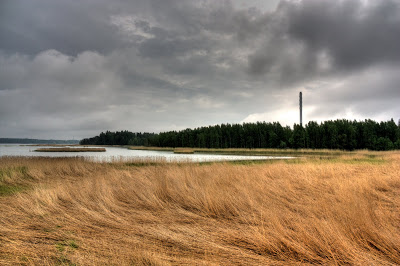 The next morning, my friend headed to work at the Aalto University in Helsinki. While he was there, I walked around the area, took a few pictures, and headed back. I had lunch with him and his colleagues at the university and took a bus to the Helsinki train station. Since my train didn’t leave until later in the day, I decided to watch Prince of Persia at the local movie theatre.

As it is common here in Europe, you select the seats when purchasing the tickets. It was pretty empty since it was Friday around 2pm, so I selected a good seat in the center of the theatre. The theatre was extremely large, and there were only 30 people or so watching the movie. The funny thing is that we were all within a few rows and sitting next to each other, which is something that rarely happens back home. Only after the movie starts do people move around, but in this case I ended up sitting next to a stranger or two.

After the movie, I headed to the train station. My train ticket was all in Finnish, but I managed to figure out which train car I was in. I sat down and noticed the train was pretty empty. During the first stop, several people got in and one woman sat next to me. I was confused, since there were lots of empty seats. I didn’t realize the tickets had assigned seats until much later…

I arrived to Tampere around 7pm. The guy I’m subleasing my apartment from told me to take a bus to the university, where he would meet me and take me to the apartment. As usual, I missed the stop where I was supposed to get off and ended up taking longer than usual. Well, I didn’t know which stop to get off. I was told to take the bus to Hervanta (which I thought was a stop name, not a suburb). Eventually I made it to the university and met with the guy. He showed me the apartment and where the grocery store was. I managed to buy some food before they closed and headed back home.